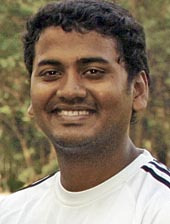 Jayanta Talukdar has been hailed as the brightest prospect in Indian archery. His journey from a promising young archer to one of World’s top archers has been nothing less than remarkable. This 23-year-old champion archer belongs to Guwahati and it was here, that archery coaches first spotted and selected him at a talent hunting camp in the late 90’s. He has been a trainee at the Tata Archery Academy, Jamshedpur since 2000, and is pursuing a BA course as well from an open university. The coaches at this academy were impressed with his physical strength and focused attitude.

In 2004, Jayanta became the top performer of the Indian team and won the silver medal at the Junior Worlds in Britain. He made Indians proud as this was the country‘s first medal at a World Championship. As Jayanta upstaged a few seasoned stars to clinch the Olympic round at the 25th Senior Nationals in Kochi, he became India’s top ranking archer in 2005. His success story continued and eventually he made history by winning the Gold Medal in the FITA Meteksan Archery World Cup at Porec, Croatia, in the same year.

Jayanta ranked second (his career best FITA ranking) behind Italy‘s Ilario di Buo in the world rankings of individual archery. In the SAF Games held in Colombo, in 2006, Jayanta defeated compatriot Tarundeep Rai to bag the men‘s individual recurve gold in archery. As a testimony to his sparkling performance, he was honoured with the  Arjuna Award-2006 for Archery by the President of India, at a glittering function in New Delhi on August 29, 2007.

Jayanta has helped the Indian team bag the team Gold in the World Cup last year and two this year at Stage I and Stage II. The trio of Jayanta Talukdar, Rahul Banerjee and Mangal Singh Champia won India the men’s recurve Team Gold in the team event at the Archery World Cup Stage 2 at Porec, Croatia, on the 9th of May this year. It was the second consecutive team gold medal after bagging the first at Santo Domingo World Cup Stage 1 on April 5. India had beaten Great Britain in Stage 1 final. After the Team Gold , the icing on the cake was provided by Jayanta when he also clinched the men’s individual recurve gold in the Archery World Cup Stage 2 at Porec, Croatia, the same day on the 9th of May this year. In fact, Porec has been a happy hunting ground for Indians as Jayanta began it all in 2006 winning the individual gold, the year in which his world ranking rose to two. He figured in the World Cup finals in Mexico but finished last among four contestants.

The same super trio had also bagged for India the first ever Team Gold in World Cup series, winning at Antalya (Turkey) in 2008 and that was followed by two more wins already this year as narrated above. In fact, the trio, along with Raju Ajonda, had won the gold in the 15th Asian Archery Championship held at Xian, China in 2007. Jayanta also won his third head-to-head contest against the Italian Galiazzo, all played at Porec, Croatia. He first tamed Galiazzo in 2006 on way to the gold medal, and again beat him in 2008 and now in the final recently, this year. So, if past data can be extrapolated to foretell patterns in the future, it is amply clear that Jayanta is one of the few Indian sport superstars who has such a trailblazing career and he is probably only a few steps away from the much coveted Olympic Gold in 2012.

This ace archer’s family is now waiting for him to hit the bull’s eye: an Olympic medal.. “Jayanta is confident about qualifying for the Olympics on the basis of his world ranking”, says his father Mr Ranjan Talukdar, a Guwahati based businessman. He even recently told an interviewer that he and his wife Satyawati would visit London for the next Olympics, if Jayanta is blessed to keep his date with destiny. World No. 2 Jayanta missed a berth for the Beijing Olympics held last year because of a dip in his performance as he was yet to adapt to new techniques imparted by his Korean coaches. However, to his fan’s delight, he has managed to overcome this lean patch witnessed recently. Mr Ranjan Talukdar said, “Jayanta adopted a new technique of playing at the instance of his Korean coach, which was one of the reasons he could not perform to his ability, as mastering a new technique needs some time. But now that he has completely adjusted with the new technique, you can expect more glory to come.”

Jayanta while speaking to the Business Standard newspaper after his latest medal haul said “Of course I am proud of my achievements. But I would like to believe that this is just the beginning. As a nation, we have shown in the past that we can compete with the best”. But he believes that the sport needs a shot in the arm in India, ideally an Olympic medal.
His next target now is the Third Stage of the World Championships, to be held in Turkey in four months. “I will continue to practice hard and, hopefully, repeat my performance” which served him well in Croatia. He says that working under veteran archer Limba Ram, who is the coach of the Indian Archery Team, has been a wonderful experience. An idol for many of the archers, Jayanta says Ram is more than an inspiration. “He knows the sport very well, is always there to guide you and his experience comes in handy.”
Jayanta is in Kolkata now to train, beginning in June, ahead of the third stage of the World Cup.  “It’s not just about working hard”, he says - “You also need to be mentally strong.” As of now, his sights are fixed on the tournament ahead, but his long-term goal remains success at the Olympics. For the sake of the sport in India, let’s hope Jayanta will continue to hit bull’s eye when it matters the most.

By Manoj Goswami
(With inputs from Delhi Bureau)