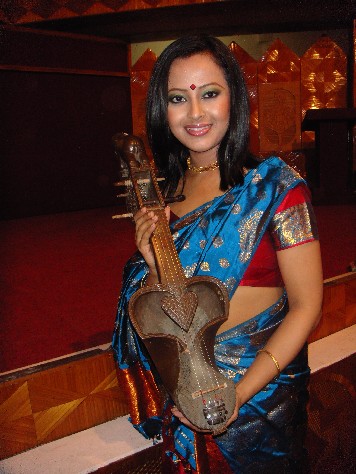 Vedajyoti Ozah, a spirited Indian Classical dance soloist and choreographer has conceptualized and embarked upon a dance preservation and enhancement endeavor named the “Sattriya Heritage Project” wherein different dimensions and facets of the Sattriya tradition such as instrumental music (with special focus on unique and dying traditional instruments), theater, and stage props will be used for traditional and contemporary interpretation of the dance form. The initial phase of this project entitled “Novel Rhythms and Melodies: Experiencing Sattriya through Mridanga and Sarinda” was recently presented at a press conference at Vivekanada Kendra, Guwahati.
Under this unique project, traditional but not so popular rhythmic instrument MRIDANGA and the forgotten string instrument SARINDA are being introduced into mainstream Sattriya dance music by Vedajyoti Ozah in collaboration with musicians Bhaskarjyoti Ojah (mridanga) and Prasanta Kr. Choudhury (sarinda) enriching the Sattriya music repertoire. The work has been documented through dance notation and digital music technology. The objective is to establish the mridanga as a major rhythmic instrument in addition to   the khol. At present no indigenous string instruments that keep tune are in use either in sattras or other Vaishnava institutions as well as in Sattriya dance music. The sarinda is starting to fill the void of a string instrument in Sattriya dance music felt until now. This is an original concept carried out in consultation with Nrityacharya Padmashri Jatin Goswami. This is the first time in the history of Sattriya dance music that such a work involving the MRIDANGA and SARINDA has been attempted. The inspiration for this work originated from the necessity of a stringed instrument in Sattriya dance music. Intense search of historical literature and contemporary literature paved the way for introducing sarinda and mridanga. This shows the originality of the work.
In Guwahati, introducing the initial phase of her years-long project, Vedajyoti recently presented a piece of beautifully composed Rajaghoria Chali accompanied by the mridanga and sarinda. Thereafter she presented the theoretical foundations of her project with slide shows highlighting textual references in the holy biographies that support this innovative venture. The work was highly appreciated by the critics and the media and has received very good reviews in both the national and regional print media such as The Times of India, Ananda Bazaar Patrika, The Assam Tribune, and The Sentinel.
Vedajyoti is a full time dancer who diligently investigates into and clearly exposes the artistic realm through creative choreography, expressive dance, seminars and workshops. Trained under Guru Indira P.P. Bora and Padmashri Jatin Goswami, both recipients of the prestigious Sangeet Natak Akademi Award (India), she has performed in mainstream Indian, European and South-East Asian venues and festivals. She also credited with introducing, for the very first time, dance enthusiasts in the Netherlands and Austria to the Sattriya dance form through numerous performances and workshops in 2007 and 2008. Vedajyoti is immensely committed to performing Sattriya dance and exploring innovative elements for presenting Sattriya as a contemporary classical dance form within its traditional framework. She envisions herself as one who can create bridges – between cultures and people.