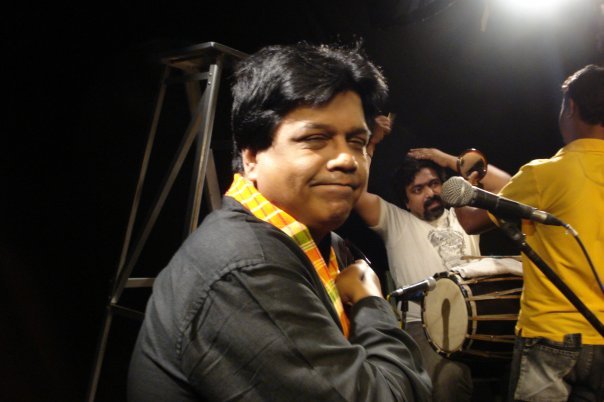 Nobody can miss Maqsoodul Haque known popularly as Mac if he or she follows the cultural space of Bangladesh. His voice and presence is quite impressing- at 52 years, he looks like 35 and his voice as melodious and heavy as anyone would want a male voice to be. But the most striking feature is that he can switch languages in no time and amazingly speak the language in the correct accent. He can speak fluent Oxomiya and even sing Bihu songs! He is also very active on Facebook and other social networking sites on anything related to Assam.

While in Dhaka, I spent two evenings with him and of course met so many powerful people- but nobody has left so much impression in my mind than Mac. He was bold, very encouraging and even after living all these years in Bangladesh, very much an Assamese. He sang on both the occasions- but most impressive was his thinking on social issues and concern for the culture of our generation. I narrated his story to a couple of Ministers and a few MLAs in Assam and they were impressed too. I told them that they should make an effort to have him perform in Assam- lets see how they respond. Mac was quite thrilled at the idea- let’s hope that it happens soonest.

Mac was born in September 1957 and is the only son of late Abu Nasser Zia ul Haque who migrated to Bangladesh (erstwhile East Pakistan) from Jorhat. His did his schooling in Narayangang and then graduated in English from Dhaka University in 1981.

Manojda told me to meet him in Dhaka and given below are some Q&As for the benefit of our readers.

Q) Tell me a little about yourself:

I’m best liked to be called a cultural man with a difference- to think and sing out of the box. Also like to be remembered as someone who has tried to maintain all cultural ties above everything else.

Q) What would be a musical career graph for you:

Let me give you a list in chronological order-

* Ma’arefoter Potaka (The Standards of Extelligence) ATN Music, Bangladesh – 2006 – with band Gorima : A special project with Gorima – the Heritage Revival Ensemble that captures the essence of Sufi and Vaishnavite folk music within the gnosis school of ‘extelligent’ thoughts in Bangladesh.

* Ogo Bhalobasha (O Love) CD Sound, Bangladesh – 1999 – with band Maqsood O’ dHAKA: The first ever jazz rock fusion album from Bangladesh. Features Blues, Jazz and fusion music in Bengali, with experiments in Indo-Jazz classical fusion, including a work of the Nobel laureate Rabindranath Tagore. Actively collaborated with the late Travis Jenkins, an American citizen, then a Dhaka based saxophone and flute player.

* Bangabda 1400 (The Bengali era 1400) - Soundtek Music, Bangladesh – 1994 – with band Feedback: A commemoration album to welcome the Bengali era 1400. The political weekly Jai Jaidin reader’s poll voted it the best album of the year.

* JOAR (High Tide) – HMV/EMI, Kolkata, India – 1992 - with band Feedback: A compilation of ten songs made popular by Feedback for a West Bengal audience. The first ever band from Bangladesh to be recorded and released by an international label.

* Mela (The Fair) – Sargam Music, Dhaka, Bangladesh – 1990 - with band Feedback: The most successful contemporary music album in Bangladesh. Features the blockbuster “Melai Jairey” a song written, composed and sung by Maqsoodul Haque which has over the years reached iconic stature due to its use during Bengali New Year festivities.

Q) What about your writings:

I enjoy writing but music takes precedence. However I’ve attempted a few books and columns on a regular basis and they are-

A short philosophical/ anthropological research work on the rustic Baul community, a branch of agnostic monotheism in Bangladesh. Broad discussion on its scriptures with particular emphasis on the teachings of the 18th century sage Fakir Lalon Shah.

* A compilation of articles, essays, commentaries on culture, politics and trends in Bengali originally published in the leading political weekly Choltipotro between 1999 – 2000.

* The Bangladesh Poet of Impropriety

Q) Do you think you have been a controversial personality:

I don’t think so. I’ve done my best to raise issues that seem common in our society and have never tried to be hypocritic. So many have read me wrong but who cares. After all music is a great leveler and I’ve always tried to use the route of music to convey my thoughts.

Q) What is your impression of Assam:

Well it is our land and nobody can take away its richness in culture and scenery. I can see how the people still try and maintain their traditional values. I wish I can perform there one day.