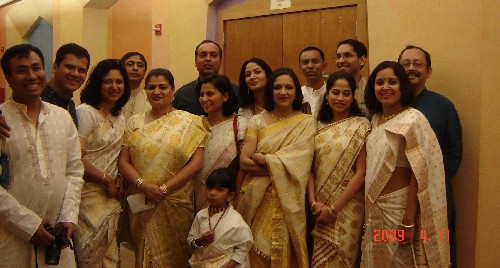 The Assamese community of Houston,     Dallas-Fort Worth and Austin     celebrated Rongali Bihu with a daylong celebration in a beautiful Hill Country park with outdoor sports, ethnic food and snacks during the day, culminating in a colorful cultural function in the evening. About 150 people gathered for the occasion.

The day started as scheduled with hoisting of the flag and singing and rendering of “Sreemoyi axomir”. This was followed by fun-filled games for children and adults.  Egg in a spoon race, tug of war and three-legged race brought peals of laughter and were enjoyed by all. Lohit Datta-Barua, Apoorba Choudhary and Ranjit Das coordinated the games with much enthusiasm and finesse.

There were also servings of traditional snacks such as doi chira with gur, various kinds of pitha, laru, borphi, nimki, and khurma. The ‘Baby Bezbaruah Xuworoni Solonto Trophy’ in fond memory of Srimati Baby Bezbaruah, mother of Alpana B. Sarangapani was awarded to the winner of the best pitha. Jeena Mahanta, Dilip Deka and Satyajit Dutta were recognized for their years of services to the Assamese community and for their inspiration and steadfast support all along. A number of young Assamese received awards for their excellence in academics.

The cultural function started with a poignant depiction of Bihu by Dil Deka. Deka talked eloquently about celebrating Bihu, from the point of view of an immigrant, living far away from Assam. She painted a beautiful picture of the bittersweet feeling of staying far away from one’s motherland, the sweet heartache and the yearnings to feel closer to home during such a fervently joyous festival. She made us all realize why Bihu is such an important festival for every Assamese, and why and how we should carry on with this glorious tradition.

The Houston, Dallas-Fort Worth and Austin teams participated in chorus rendering of songs of Bhupen Hazarika and Jyoti Prasad Agarwala. The major attraction of the program was the blitheful Bihu dances by the Austin and Houston ladies dressed in splendid Assamese attire. There were also a number of individual performances receiving applause from the audience including a song recital by Riju Choudhari, Hindi duet by Ashok and Ruplekha Barua, songs by Pankaj Panging, a solo Bihu dance by Alpona Barooah, violin recital by Surovi Thakuria and songs by Reema Das.

The audience went through a laugh riot watching the drama performance by the Dallas and Houston teams, respectively.  The first one was a one act play of the late “bhaiya mama” team which was adapted and directed by Jonali Barua. The desperate need to hold on to our precious culture, which is often felt to be fast disappearing in today’s rapid globalization, was humorously enacted by Githartha Pathak, Jonali Baruah and Pankaj Paning. The second one was “Theki-Thwra” directed and scripted by Rajen Barua. This script is based on a short story of the same name by legendary Laksminath Bezbarooah. The story depicts the simple Assamese village life where there is neither lack of food nor any dearth of hospitality and wit among Assamese homemakers. The actors Pallabita Bhuyan, Plabita Barua, Gautam Choudhari Rajen Baruah and Gautam Borthakur were amazing. Both the skits received wide applause from the audience.

As the saying goes “Every good thing must come to and end,” and so did the glittering evening of 11th April 20009. It left behind a   sparkling residue of fond memories of community love and patriotic nostalgia, amidst the rhythmic beats of dhol pepa and gogona.

Last but not the least our applauds and heartfelt appreciation to Sanjit Das, the main organizer and to the host families of Austin who put in tireless efforts, and also to Pankaj Panging and Gautam Borthakur, the coordinators for the cultural items from Dallas and Houston respectively. Till we meet again in the next Bihu   -Au Revoir Bidai—