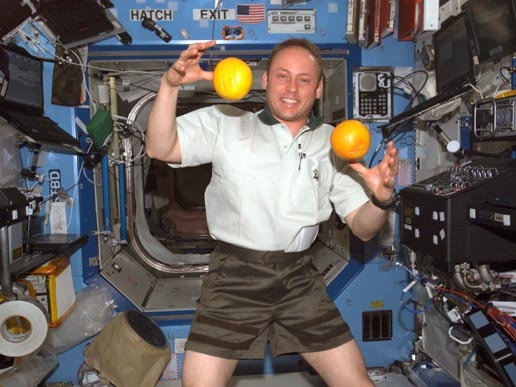 British science fiction author,  inventor and futurist “Arthur C Clark “ had once said “Sufficiently advanced technology is indistinguishable from magic.” And his words resonated loud and true on a unique and unforgettable event, which took place in Assam recently. It was as if magic happened when Friends of Assam and Seven sisters organized and successfully coordinated space talks at four educational institutions of North East India with NASA Astronaut “Mike” Fincke, Commander of the Expedition 18 mission abroad the International Space Station (ISS).

The first of the talks was organized on 7th November 2008 at Dibrugarh University. In recent times, Dibrugarh University has introduced innovative degree courses unique to the region and has been able to achieve success in many spheres of its activities. When FASS selected Dibrugarh University for the event, one of the aims was to create a positive effect in a normally uneventful place like Upper Assam, the center of attraction always being Guwahati, the capital of Assam for the past several decades.  The talk started with Mike Finke greeting the audience with an impromptu Bihu song (“Ephale dhwlor mat, ephale pepar mat, majote nasonir jak...” ) which enthralled the audience.

A massive gathering of about 700 people (of which 400 were students) gathered and an impressive number of them participated in the interactive talks. Interacting with the media persons to share there feelings after attending the space talk one of the University students said, “I feel that I am the luckiest person today for being able to attend the space talk, I am thrilled to hear an astronaut online from outer space for the first time in my life, and now I aspire to become an astronaut someday.” Another student said, “I always dreamed of becoming an astronaut and after attending the space talk I am more inspired and determined to be one.”

The next talk was held at St. Anthony’s College in Shillong. On 1st December 2008, St. Anthony’s College wore a festive look with banners and flyers well displayed in the campus and the auditorium.  The space talk was held in a packed auditorium attended by a large number of the staff and students of the college, along with students from neighboring schools and colleges to witness this exceptional event.  Local visual and print media persons were present along with some from regional and national media. Prior to this day, a dry run of the program was meticulously organized by Rajen Barua in Houston. Based on the experience of the dry run, students were given an idea of the talk to take place, the questions they would ask and the like.

Before the final satellite link with ISS took place, operators from NASA ground station established the radio link between Amateur Radio Volunteers which was established from Honululu, Hawaii (Nancy) and Brussels in Europe and relayed to Shillong.

The live interaction began at 1.45 pm (IST). Fr. Ioannis, the Principal of the college introduced the college and greeted Mike and his team at ISS. It was then Mike’s turn and Mike began by greeting the audiences with Khublei Shibun (‘Thank you’ in Khasi). Everyone was thrilled!

With the commencement of the questionnaire session came interesting answers from the astronaut for each of the students. When asked by the one them whether he could see man-made objects like the Great Wall of China and the pyramids from the space station, he said he could see both the structures very clearly. Asked if he could see the effects of pollution or climate change, Mike Finke said that climate change was a gradual process but the effects were indeed visible from space.

When asked what he missed most about earth while in space, he said, “I miss my family and my home”. There was also a question in Assamese and he answered it rather well to the interest of all. Mike also sang a few lines on seasonal greetings in Assamese from the space station. His ability to speak the language so fluently amazed all the people who were inside the auditorium.

A Khasi song from the Music Department of the college was presented for Mike and his team at ISS, a once in a lifetime chance of having indigenous melody traveling from Shillong into the outer space. Mike later said he was deeply touched by the song and that he would record and play it while in space. ‘Khublei Shibun’, a Khasi ‘Thank you’, from Mike was his way of expressing his appreciation for the outpouring of love and enthusiasm from the young students.

The talk at Axam Jatiya Vidyalaya on January 7, 2009, got students, teachers, parents, guardians and leading citizens of the State crowded together to listen to the intense conversation between the AJV students and the NASA astronaut. Their joy knew no bounds on Mike Finke saying “Moi alop Asomiya kobo paru [I can speak a little Assamese].” A stream of questions came to him in the form of: “Can you sleep normally inside the spaceship? How do you set your sleeping and waking times?  Do you recycle or manufacture water? How do you take a bath? Is it possible to take a shower inside the spacecraft? “ And, they received interesting replies. The astronauts said they recycled urine, manufactured oxygen and recycled carbon dioxide, but could not have a shower in the space station and could only wipe themselves clean with a towel. The astronauts said they could see large objects on the Earth’s surface like the Great Wall of China and the Pyramids. Describing the opportunity as historic, school rector Ranjit Narayan Deka, said, “This day will always remain the most significant day for our school.”

The last of the talks was organized at the Central Agricultural University Manipur, in Imphal. The talk lasted for about ten minutes during which Mike expressed his desire to visit Manipur in the near future. “Manipur is very close to Assam, lets see what we can do and I will try,” Fincke added when a student of him visiting their state asked him. He said a few words in Manipuri language, which delighted the local people present. Fincke revealed that during the frequent passing of their spaceship along north east area he can see Loktak Lake which is very beautiful when seen from space, however remains foggy at most times, he added. When asked about giving words of hope from the ISS for the North East he said, “North East India is a very beautiful place with its abundant natural resources and that good care and correct utilization should be made of them.  He also said that since his childhood he aimed to become an astronaut, that he never gave up, he worked hard to achieve his dreams and so can everyone. Being inspired by the historic event of talking to astronaut Fincke, many Manipuri students expressed their desire to become astronauts someday.

Much of what happens around the globe is driven by the relationship between people and where they live. Here an American astronaut, the son-in-law of Assam, the ever charming the ever affable, Mike Finke, did all of Assam and her seven sisters proud. By being a rainbow in their lives, painting a picture of beauty, faith and hope. And above all by reaching forward, literally, and instilling confidence and encouragement into the hearts and minds of the young and old alike, the space talk ended in magical crescendo, opening fresh pathways of dreams and aspirations.