Ram and Alpana Sarangapani of Houston, Texas, lost their only son, Nitin, a US marine, a few years ago. Once when Nitin was very young and visited Assam with his parents, he was struck by the presence everywhere of the large number of barefeet people, including young ones. The child confided in his parents saying that when he would grow up and would have money to spare, he would buy shoes for those who couldn’t afford to do so and distribute them whenever he would visit Assam. Now that Nitin is in heaven, remembering the kind and thoughtful words of their innocent son many years ago, for the past several years, his parents have made it a point to make a pilgrimage to Assam once a year in December, buy hundreds of pairs of shoes and distribute them to school age students, the age that Nitin was when he made the observations. This year, their effort was sponsored by Assam Society of America Foundation (ASAF, assamfoundation.org) and Assam Foundation of North America (AFNA, assamfoundation.net). 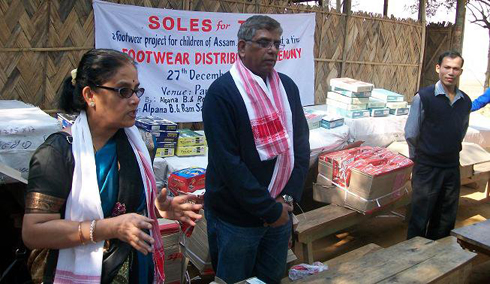 On December 23rd, 2010, the Sarangapanis travelled to Prajnadwip Jatiya Bidyalay in the Village of Saraipani, a few miles out of Titabor to distribute 205 pairs of shoes to kids in this residential-cum-day school. This school was started by late Mr. Jugal Bhuyan, who had joined the United Liberation Front of Asom and then later gave up his affiliation with the organization to start an idealistic private school focused on teaching cultural and artistic heritage of Assam to young minds. Unfortunately, Mr. Bhuyan passed away a couple of years ago at a relatively young age, leaving the school temporarily rudderless, although others have taken up the responsibilities now. On the 23rd of December, the Sarangapanis were helped by Pallav Saikia (Pleasanton, California) and his family, Jugal Kalita (Colorado Springs, Colorado), and Prasenjit Khanikar (North Carolina) and his family, among many others. During the same program, Lions Club of Jorhat donated 50 blankets to the school for use by students in residence. 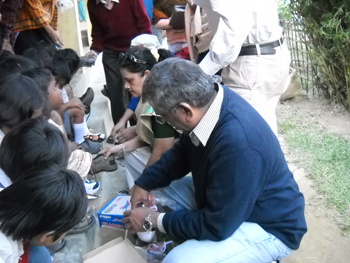 On December 27th, 2010, the Sarangapanis, donated 506 pairs of shoes at Parijat Academy in Guwahati. Three hundred pairs were given to students at the school and from other schools in the area. The rest were distributed later by the officials of the school. This is a school, started by Uttam Teron, serves several hundred mostly under-privileged and tribal kids.

On January 4th, International Braille Day, 60 pairs of shoes were distributed at the Blind School in Jorhat by parents and relatives of Pallav Saikia of Pleasanton, California.

During the first week of January, 2011, blankets, note books (bohi), pencils, pens and other school supplies were distributed in memory of Nitin to school children in North Guwahati, by relatives of Alpana Sarangapani.

The Sarangapanis take this opportunity to thank everyone who helped in the Soles for Tots program this year. Special thanks are due to Pallav Sakia and his family, Prasenjit Khanikar and his family, and Jugma Bora and his family (Dublin, California).

Soles for Tots is an ongoing project. If you would like to be a part of this worthwhile project, please contact the Sarangapanis. Any contribution you make will be tax-deductible in the US or in India.