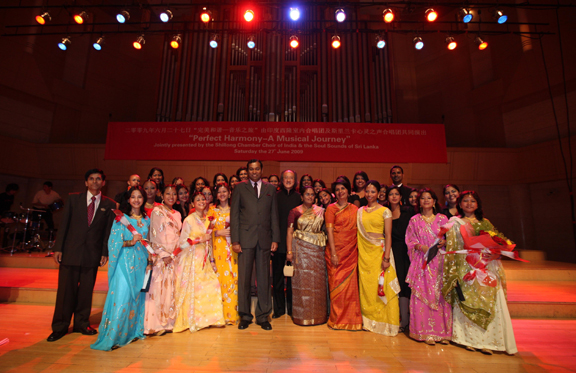 Music as it was once said by     Rabindranath Tagore, fills     the infinite between two souls. Celebrating the joy of music,  a unique cultural event took place in China’s capital city of Beijing on Saturday the 27th June. At the Concert Hall in the historic Forbidden City complex, two choirs from India and Sri Lanka, the Shillong Chamber Choir and Soul Sounds respectively, presented a joint concert, aptly titled, “Perfect Harmony: A Musical Journey”. The Concert represented a meeting of cultures, emphasizing the meaning of friendship and harmony.

Speaking before the start of the concert, and sharing the podium with her colleague, the Ambassador of Sri Lanka, Karunatilaka Amanugama, the Ambassador of India in China, Nirupama Rao, told an audience of over one thousand people, “The two choirs you will hear today are unique in every respect. They embody grace and dignity, innocence and vision. They have the unique ability to blend tradition with modernity. They represent the globalizing face of our countries, open to new ideas, curious about the world around them, and at ease with both East and West.”
The Concert was made possible through the joint collaboration of the Embassies of India and Sri Lanka in Beijing, with the support of the Chinese People’s Association for Friendship with Foreign Countries.

The two Choirs have been in touch since 2006, when the Shillong Chamber Choir visited Sri Lanka.

The Concert on 27th June coincided with a photo exhibition of Heritage Sites of India and Sri Lanka held at the same venue, with the cooperation of India Tourism, Beijing and the Sri Lanka Tourist Board.