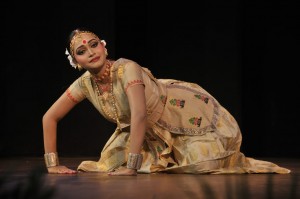 Krishna Vandana: A beautiful expressive Vandana sung on raag Sareng is danced in praise of Lord Krishna. Lord Krishna, the beloved son of Vosudev and Deivaki, brought up in the palace of the king of Brajdham and the one who killed “Kansha”.

Gopi naach: It is a pure dance form of feminine character of Sattriya based on taal chuta. Gopi naach is also known as “pravesh naach” as it is performed by the lead female characters i.e. the “Gopikas” for their entry in “Ankiya naat”.

Pekho modono gopalo: This is an abhinaya piece based on ek taal. This is a Borgeet composed by Sri Sri Madhavdev, chief disciple of Mahapurush Srimanta Sankardev.

Guru vandana and vishnu vandana: Guru vandana is an eulogy to the vaishnavite saint Srimanta Shankardev, followed by a vishnu katha varnanam composed by Srimanta Sankardev as his first poem. This vandana sings the praise of the beauty of lord Vishnu. This is based on 3 different taals - Ek taal, Rupak & sutkala and Raag Shri.

Ram Vandana: This Vandana will begin by a Nandi Slok sung in praise of Lord Rama. This will be followed by a Bhatima of Ankiya Naat- “Ram Bijoy” composed by Mahapurush Srimanta Shankardev, based on Ek Taal. Raag- Srigandhar & Purbi.

Madhu Danav Darana…: This is a “totoi”, we can say as hymn. Every sentence consists of twelve words. The first word of the next line begins with the last word of the preceding sentence. It is this 16 stanza Sanskrit hymn that was composed by Srimanta Sankardev while walking the 8 steps on stairs leading to the king Naranarayan’s court.

At an age when young girls are captivated with dolls and playing dress up, Mridusmita Das catapulted into the world of nritya, taal and lai. She began her training in Bharatnatyam with renowned guru Indira P.P. Bora at the tender age of 5 and eventually found her calling in Sattriya in her teens under the tutelage of Guru Ramkrishna Talukdar. Since then, Mridusmita has charmed audience at home in Assam and in different parts of the country with her grace, poise and sense of rhythm. Currently doing her graduation from Lady Shri Ram College, Delhi, Mridusmita has had the opportunity of performing in many prestigious platforms under esteemed banners like that of Sangeet Natak Akademi, Government of Assam ,EZCC, to name a few.Some of her major performances include her recitals in solo and also duet with her Guru in Assam Day celebration at Pragati Maidan, Talkatora Stadium New Delhi, Balijatra and Barabati Nrityoutsav in Orissa, Natyanjali festival in Chidambaram, Kumbakonam, and Tanjavur.

Mridusmita is a student of Lady Shriram college.