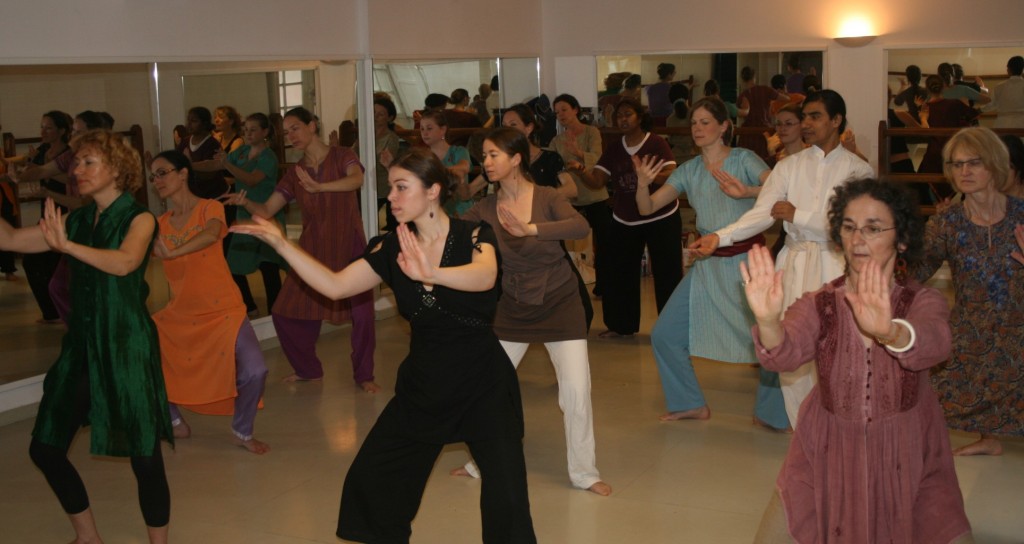 For the first time, the three foremost cultural  organizations Tendanse, Ajna and  Preserver Majuli of France, jointly organized three workshops on the monastic Sattriya Dance from 17th April to 5th may2009. Bhabananda Barbayan, an exponent of Sattriya Dance and Music and the Adhyapak of Sattriya Dance Academy at the Srimanta Sankardeva Bhawan, Delhi was invited to conduct and teach the Sattriya dance form in these workshops .

There were a total of 40 participants in all. Almost all the participants came from different parts of France and other countries. Some of them even came from Colombia. The first workshop was organized in Rodez, a city and commune in southern France, in the Aveyron Department of which it is the capital. Existing from at least the 5th century BC, Rodez was founded by the Celts.  The second one was in Toulouse, a historical  city known as the pink city of France; besides being one of the prime centres of the European aerospace industry, with the headquarters of Airbus, Galileo Positioning System, the SPOT Satellite System and CNES’s Toulouse Space Centre (CST), the largest space center in Europe. The last one was in Montpellier, a picturesque city in the south of France, 10 kms inland from the Mediterranean Coast located on the bank of River Lez.

These week long workshops were scheduled from 10 am to 6 pm, followed by a Lecture-Demonstration on different  topics of Sattriya. The  morning sessions were dedicated to Matiakharas or ground exercises for improved physicality, Abhinaya or expression was demonstrated post lunch and ‘Nach’ or pure dance was explained at the end of the day. Besides these three workshops, Mr Barbayan also took part in the following:

On 27th April and 3rd May 09, he performed for mass audience in Toulouse and Montpelleir cities respectively.

On 7th May 09, Mndapa, a Paris based  institute, dedicated to promoting Indian art and culture invited Mr Barbayan as a guest of honour  for the evening program.

On 8th May 09, he took part in a discussion session about performing  procedures of Dance and Drama on the stage with some technical personalities of Zaman Art of France held at the Auditorium of “Musee Du Quai Branly” in Paris .

(Source for the details of cities in France: Wikipedia)

Adhyapak Bhabananda Barbayan is an accomplished Sattriya dancer, Khol-player, singer, choreographer and teacher based in Delhi. He was fortunate to be born within the culturally and spiritually rich environs of the Uttar Kamalabari Sattra, a Vaishnavite monastery in Majuli, Assam. He grew up soaking in the rich 550-year-old Satriya traditions combined with the colourful tribal culture as well as the surrounding natural beauty of this unique riverine island. The Sattras in Majuli are the treasure troves of classical song and dance and folk culture that has evolved from the days of Mahapurush Srimanta Sankaradeva. Bhabananda was inducted into the folds of the Uttar Kamalabari Sattra at the tender age of four and started receiving training in the art forms of Nrittya, Gayan, Bayan etc. from the renowned Gurus at the Sattra.

He has always been a stellar performer and has been a recipient too of various scholarships from the CCRT, Delhi and Sangeet Natak Akademi, HRD Ministry, Govt. of India etc. He also has two post-graduate degrees in Geography and Assamese Literature from Dibrugarh University. Right now he is enrolled for a PhD programme at the Rabindra Bharati University, Kolkata and doing research on Tala Patterns of Sattriya Dance: An attempt to systematize the diverse forms as practiced in different Sattras. He has to his credit quite a few drama publications like ‘Sita Haran’, ‘Bali Badh’, ‘Setu Bandhan’ etc. all written in Brajawali language. He has also produced and choreographed various Sattriya dance dramas and Bhaonas; some of them being quite innovative concepts. As a performer he has been performing and dazzling the audience since the age of eight till date at various prestigious zonal, national and international level events and platforms all over India and abroad. As an Adhyapak, he has been teaching too in various institutes and at present he is deeply involved with the ‘Sattriya Dance School’ established by the Assam Association Delhi in Srimanta Sankaradeva Bhawan, New Delhi.

Posoowa wishes him good luck in all his future endeavours and may we see and hear a lot from him about the timeless living art form from Xonor Oxom!