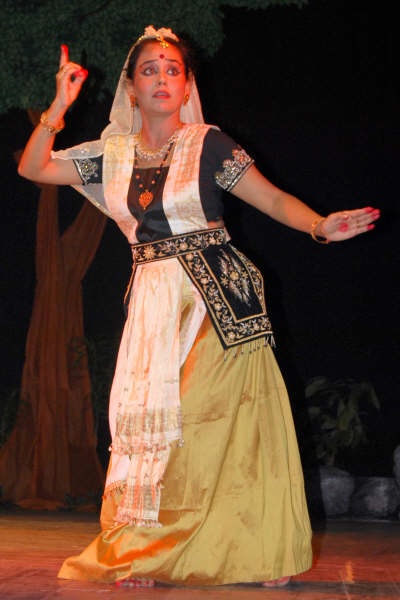 While some of India’s other classical dance forms have undergone revival in the recent past prior to their modern glory and popularity, Sattriya is not just a classical dance form for us even though it originated within the sacrosanct  premises of the Sattras more than 500 years ago. But it remains a living tradition intimately woven in our life since its creation by Mahapurush Srimanta Sankaradeva.  The Sangeet Natak Academy finally gave due recognition and acceptance to this Assamese dance form on 15th November 2000 as one of the eight principal classical Indian dance forms. The other seven forms are Kathak, Manipuri, Kathakali, Mohiniattam, Bharatnatyam, Kuchipudi and Odissi.

Today Sattriya is regularly performed to its pristine glory at the world stage thanks to the relentless efforts by some of its exponents. Far away from our Sattras, the cool summer air of London resonated with the sound and melody of khol, taal and the banhi as Prateesha Suresh and Haricharan Bhuyan Barbayan of Natun Kamalabari Sattra performed Sattriya Nritya at the Nehru Centre, London on 19th May, 2009. Connoisseurs of classical dance forms in London got an opportunity to enjoy the austere yet artistic and aesthetic elements of the Sattriya.  Prateesha was invited by the Nehru Centre to present a Sattriya recital. Shri Haricharan Bhuyan and Prateesha have been working together relentlessly for the promotion of Sattriya Dance for past 10 years. They have presented many Sattriya performances in India. From New Delhi, Kolkata, Mumbai, Chennai, Hyderabad, Bangalore to Jaipur, Calicut, Trivandrum, Chidambaram, Udupi, Mysore, Pondicherry, they have taken Sattriya, far and wide.

The London performances included  “Ravanoloi Sitar Abhishaap” and “Usha Aniruddh”. Based on Kaviraj Madhava Kandali’s RAMAYANA and SHRIMAD BHAGAWATA respectively. The choreography of both the dance pieces were created by Prateesha herself. It has been her endeavour to support the Bhakats and this is the second time she presented Sattriya in London. Shri Haricharan Bhuyan Barbayan with his experience & expertise and the team of musicians have been a great support to Prateesha. Pratishruti Foundation- a non-profit organization has been started by her to work for the cause of Sattriya. She had started the Prratishruti Annual Dance Festival from last year where she presented 20 artists from the Sattras and felicitated a few senior Barbayans for their lifelong contributions to the Sattriya dance. She is starting a Sattriya Dance, Music & Drama Institute at Guwahati to be inaugurated in mid-July 09 and proposes to impart Sattriya training to enthusiasts in Mumbai from July, 2009.