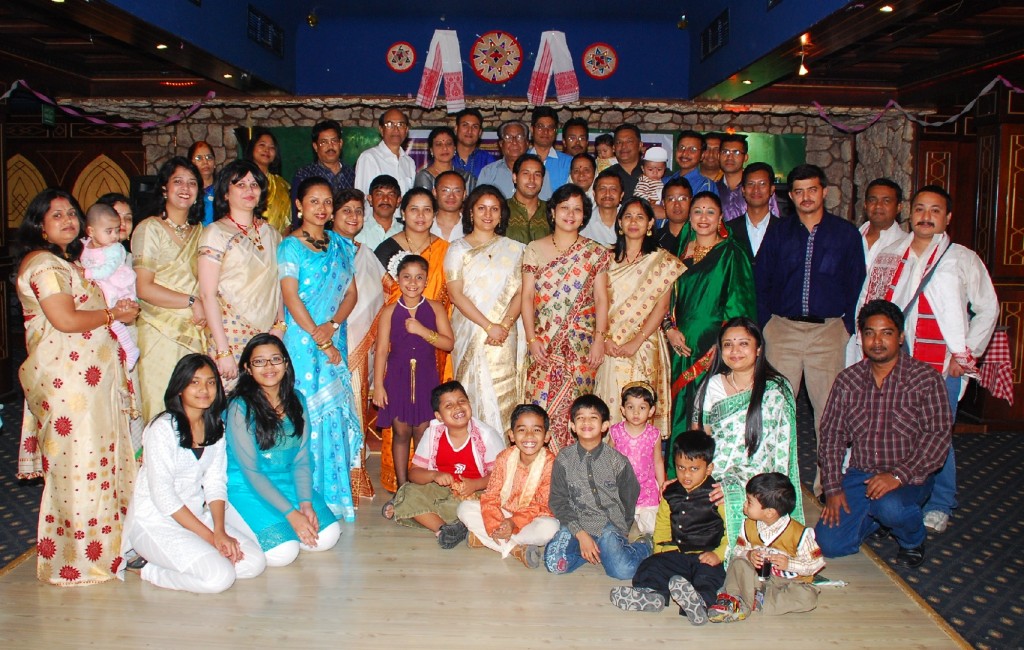 The small but big-hearted Assamese community of Bahrain celebrated the Bohag Bihu in Manama City, capital of Bahrain on 17th April, 2009 with pomp and gaiety.  The beautiful and sunny Kingdom of Bahrain was made colorful with the Rongali utsav of the community.

The celebration started with the serving of traditional Assamese delicacies like til pitha, ghila pitha, larus, chunga chawal, etc., especially prepared by the ladies and also flown in all the way from Guwahati. The special guests, namely Mini and Jatin Bhagawati, Dipika and Jogendra Mohan Das of Assam and Nand Kanwar Pareek from Saudi Arabia, were felicitated by Nivedita Dutta, Chief Organizer.  The special guests have timed their visit to Bahrain to meet their near and dear ones, to be present in the Bihu festival and also to enjoy the Formula#1 Race to be held in the last weekend of April in Bahrain.

Addition of six newcomers to Bahrain namely Sanjib Changkakati, Hemanta Kr Bora, Raju Das, D.D.Rabha, Shiva Doley and Aroop Kumar Brahma has strengthened the Assamese community of Bahrain. They were introduced and offered a token welcome gift by Nivedita Dutta. This was followed the cultural program performed by the talented members of the community.

The most awaited part of the evening was the Bihu Dance performed by Antara Banikya and Mimi Bora who made the audience jive in to their moves.

In addition to the cultural program, there were a few innovative game shows and quiz competitions among all the members present. The quiz revolved around questions from Assam. The groupings were named as Doi-Chira, Bundia-Bhujia, Cup-Plate and Sarai-Gamucha with the Doi-Chira group coming up as winners. The most entertaining part was singing of the same popular Assamese number in Ojapali Style, South Indian Style and Bhajan Style. The performers invented their own way to entertain the audience. and game shows were conducted by Pinki Sharma, Mimi Bora, Pankaj Deka and Biman Sharma. The children especially enjoyed the tekeli bhanga game. Saswati Bora and  Amitabh Kakati won the coveted prize of best-dressed lady and gentlemen respectively.

The newcomers Sanjib and Hemanta proved their mettle by the superior quality of their dance. The Assamese society, Bahrain can certainly expect more from them.

The program ended with a Vote of Thanks ably conducted by Layan Ch Hazarika, the overall supervisor of the celebration committee. He thanked all those who were present and without whom the program would not have been possible.

Hazarika stated that no words were sufficient to thank the gorgeous couple of Nivedita Dutta and Madhab Dutta for keeping the Assamese community lively and making everyone feel at home away from home. Nivedita Dutta has been actively involved in various socio cultural activities in Bahrain for close to two decades. As President of the Indian Ladies Association of Bahrain during the year 2007-2008, the Indian community of Bahrain appreciated her initiatives. Madhab Dutta has been in Bahrain for the last 23 years working for the Oil Company BAPCO.