The festival of joy and happiness and the most endearing festival of the people of Assam, Rongali Bihu, was celebrated in the Millenium City by Assam Association, Gurgaon on 18th April, 2009 at 8 PM in the HUDA Community Centre Ground in Sector-46. The gala cultural evening, followed by a sumptuous dinner was attended by more than 300 people, hailing from as far as Noida, Faridabad, Dwarka, New Delhi and of course, Gurgaon. The cultural evening was preceded by a programme, dedicated to all those killed in the recent bloodbaths during the terrorist attacks in different parts of India and most particularly in Assam. The programme was performed by small children in the age group of 3 to 13 years and was applauded by all those present. 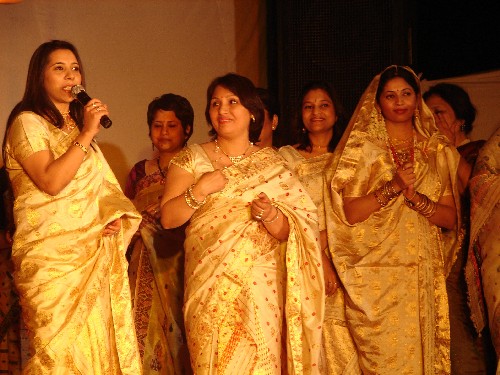 The curtains to the cultural evening was raised with ‘Lighting of Lamps’ by honoured guests Binaybrata Sharma, Ex-CMD, OIL, Trailokya Prasad Khaund, Retired IAS officer and vetern citizen of Gurgaon Nabakamal Bhuyan, assisted by the President of Assam Association, Gurgaon Mridul Bhuyan, Vice-President Mukul Gogoi and General Secretary Kalpajeet Nath. The souvenir of Assam Association ‘Samannay’ was inaugurated by Binaybrata Sharma, flanked by Editor of ‘Samannay’, Geeta Baruah Nath. The cultural evening started with a chorus by few of the lady members of Assam Association, Gurgaon, namely Ashalata Bhuyan, Geeta Baruah Nath, Reena Sharma, Momee Gogoi, Mimun Das, Rajashree Kashyap, Mala Sharma, Nisha Agarwal, Nilanjana R Dutta. The chorus was followed by a graceful classical Odyssey dance ‘Mangalacharan Namami’ by Banditta Nath. The cultural evening gained momentum with a couple of modern songs rendered by upcoming singer from Gurgaon Arun Baruah, followed by Arup Bhagawati and his daughter Trisha Bhagawati. The spirit of the evening soared with a beautiful Bihu Dance performed by Vidisha Sharma and Akankshya Bhuyan. The highlight of the evening was a performance of melodious songs by Debojit Das and his wife Mimun Das. The true Bihu spirit was further displayed by another graceful Bihu dance by Momee Gogoi, Kaveri Chakroborty and Nisha Agarwal. The evening reached its crescendo with an innovative show, displaying the traditional clothes of Assamese women. The most inspiring fact was that several graceful ladies from the non-Assamese sorority of Gurgaon participated in the event along with the lady members of Assam Association, Gurgaon, enthralling the viewers. The cultural evening came to an end with ‘Bihu Husori’ by the youngsters of Assam Association, Gurgaon, followed by ‘Vote of Thanks’ by General Secretary Kalpajeet Nath.