Annual General Meeting of Assam Society of America (Axom Sangha) was held in Marriot Hotel, Colorado Springs, CO, on the sidelines of ASSAM2009. The meeting was presided by Dr. Ganesh Bora and opened up with thanking the ASSAM2009 host committee for giving the opportunity to gather in the 4th of July week-end. The members present discussed various projects initiated by ASA. Following members were present in the meeting.

The executive committee was requested to explore new project coordinators and review the projects, especially Sharp Scholarship and Adopt-a-Child (from class VI to XII). Members also expressed their concern about the ASA website, which is non-functional right now. Jugal Kalita, Prabal Tahbildar and Babul Gogoi are requested to revive the website with updated content.

All the members praised the editorial board of Posoowa, the monthly newsletter of ASA, for their excellent job in publishing it regularly with very high quality. Though the publication of the newsletter is that of volunteer efforts of the editors, but the meeting realized the cost involved in it. So there was a request for sponsorship of Posoowa by the members and the contribution was decided to be $50/issue. There was a spontaneous response and the following families/persons decided to sponsor the newsletter in the months mentioned against their names. The meeting has requested other members also to sponsor an issue of the ‘Posoowa’.

April and May/10: Alpana and Ramgopal Sarangpani

The meeting ended with vote of thanks and congratulating the ASSAM2009 host committee for their marvelous hospitality. 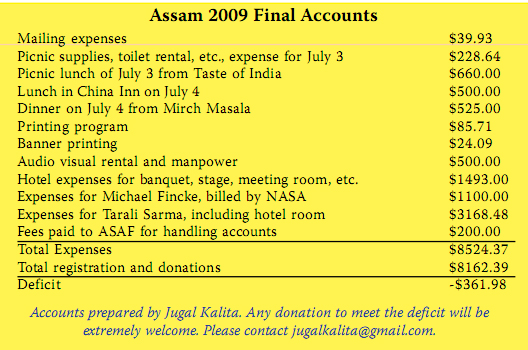