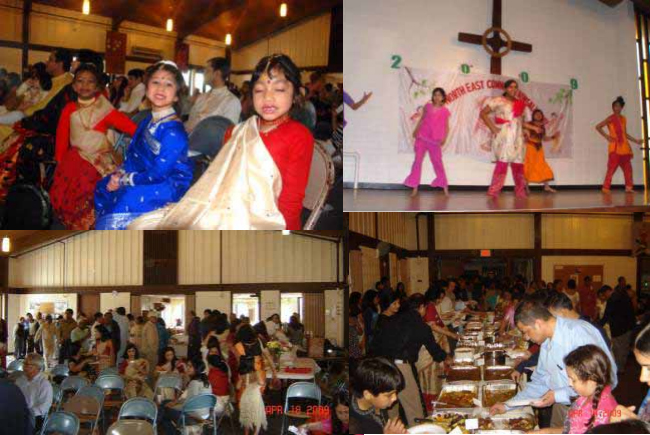 After a bitter cold and long winter in the NE part of the US, even the weather agreed to welcome the Assamese New Year with sunshine and warmer temperature. And a generous crowd of about 200 people mingled with each other, relished traditional snacks, listened to music and celebrated the spirit of Rongali Bihu in Princeton, NJ on the 18th of April 2009.

Keeping with the traditions built over centuries back home and the ones that the community has been building over the decades- the Bihu celebrations showcased activities and talents in various fields. The festivities began with hoisting the “gamosa” to the tune of “Sreemoyi Axomir” by Abhisekh Choudhury. A traditional Hussori, practised and perfected over weeks blessed the community. Kalpana Bordoloi of NJ welcomed the Hussori  to the “bihutoli”. The kids and the adults alike enjoyed various games with much enthusiasm. And while the adults socialized, the kids dressed up, frolicked, painted, and performed. In a way this year’s Bihu celebrated the children spanning a range from preschoolers to the ones who are on the threshold of college life.

So when the cultural activities began- they emceed, they danced, they sang, they played instruments and entertained everyone. It was very encouraging to witness their involvement and traditional performances. The dedication of the children, their parents and the teachers clearly deserve a special mention. Their effort to keep the culture alive half the world away from its root is amazing. The participants for the cultural show were Pokhi Barbara, Deisha Brahma, Anuj Dutta, Risov Dutta, Naya Kalita, Rashmi Hazarika, Sukanya Handique, Ruhika Patra, Ananda saikia, Abhijaat Sarma, Arunabh Sarma, Amit Sarma , Pongkhi Sarmah, Meghna Sarmah, Varsha Sarma, Paulash Sarmah,  Priya Sarma,Devika singh and Suranjana Thakuria.. Partho Hazarika and Anoushka Barpujari emceed the event. Deesha Sarma’s description of Bihu set the tone for the cultural function. Rick and Nick Bhuyan entertained the gathering with their impeccable rendition of popular songs.

Sankumani Sarma (NJ) and Gayatree Sarma’s (NJ) songs were the awaited adult performances of the evening and they were delightful. The cultural function ended with the rendition of “Jatiyo Sangeet”.

Dinner and the snacks, as always, were outstanding affairs – completely created and served by volunteers. If the afternoon snack table was covered with ladus and pithas, the dinner and dessert tables proudly displayed all authentic Assamese delicacies in abundance.

A new year has been added to the “probaxi axomeeya” life. While praying for happiness and peace with “Xorai –Gamosa” for themselves, the North East Assamese community extends the same wishes for a prosperous New Year to everyone around the world.