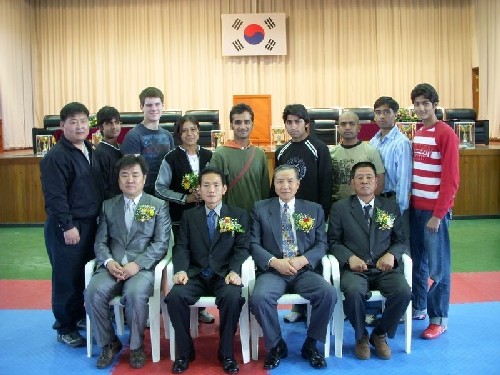 This is the story of a young Assamese girl who is learning Taekwondo in South Korea. Quite an unusual pursuit indeed even by our progressive Assamese standards. However, none of the stereotypes held her back. Darshanajita Bharali hails from Dhakuakhana, from the Lakhimpur district of Assam, with seven years of experience as a national level Taekwondo player. Well-trained under skilled Korean and Iranian coaches in Indian camps, she has won many medals in this field and holds a Dan-2 Black Belt. After completion of her 12th standard she is now in South Korea, where she is learning different aspects of Taekwondo – the Taekwondo dance, Poomse (forms), breaking, and acrobatic Taekwondo – and is also teaching English Taekwondo at the Korean Taekwondo Centre.

Darshanjita’s parents work in the medical department in Assam. She has two sisters and a brother. One of the sisters is married and the other two are pursuing their studies. Her father being an avid sports lover, she has been interested in sports since her childhood days. He introduced her to sports at the age of 13 and became her first coach. He wanted her to get into athletics initially but she could not pursue it due to lack of facilities and proper infrastructure in Dhakuakhana. She, therefore, switched to Taekwondo. Her mother had a big role to play in this switchover and it was her encouragement that gave her the courage to join this tough game.

Initially, she had joined the Dhakuakhana Taekwondo Club where Mr. Krishna Kanta Gogoi had coached her. He used to train his students twice a day, in the mornings and in the evenings. She gained interest and proficiency in the game very soon and practiced with whole hearted devotion, never missing a single class. Her hard work bore fruit and she developed her skills pretty quickly. In fact, she was so good that her coach gave her permission to participate in the inter-district championship when she was only a yellow-belt holder. She was very excited as normally no one under a green-belt (which is awarded after the yellow) gets permission to participate in such events. She was so enthused by this that she went on to win the gold medal in the event!

She soon got a call to join the national camp, where she trained rigorously for three weeks under Coach Mr. Praban Saikia, who was himself an international player. He belongs to Jorhat but based in Delhi with his family. His coaching improved her techniques immensely. After her training was over, she accompanied Mr. Saikia to Kerala where she took part in the Junior National Championship. Though she could not bag any medal in this event, she was lauded for her good performance as a beginner. Post that, Mr. Saikia invited her to Delhi for a month, where he further helped her perfect her fighting skills. In that one month she progressed from being a juvenile onto being a terrific fighter. He helped her change her style of fighting and transformed her into a player fit to compete in nationals level competitions.

After her return to Assam, she participated in the National Championship, held in Manipur, and bagged the Bronze medal. She was then selected for the India Camp, which defined the happiest moment in her life, as she was the only one to get into the India Camp from her team. At the camp she trained with international players and learnt many new techniques in Taekwondo including new fighting styles, better tactics, importance of self-discipline, etc. Post her time spent at the India Camp, winning medals at national events became a matter of routine, such was the level of her training and skill.

However, she was not happy due to one weak point in her career– though she had had the opportunity to participate in the India Camp four times, she had never been selected for the International Championship. When she didn’t get selected even after her last India Camp, held in Bhopal, she felt really down. After all those years of hard work and dedication she couldn’t bear failure any longer and considered leaving Taekwondo. However, her old mentor Mr. Praban Saikia helped her and encouraged her to pursue her promising career. He told her, “Don’t waste your time. Do something else and make your life.” She felt that he was right. She accepted that she couldn’t become a world-level player, but felt that she could be something else.

Therefore she headed to South Korea, to obtain higher education in the field of Martial Arts. Now she is pursuing a diploma course in the country, from where Taekwondo originates. “South Korea is a really beautiful place,” she says. “It is a hilly area next to the sea. Korean people are very kind and friendly. But they have one big problem – they only use their mother-tongue and cannot speak other languages, not even English!” This posed a great problem to her at first, but now it’s no longer a problem as she has become fluent in Korean. She finds that Koreans are keen on learning English too. Another problem that she faced initially was Korean food. She was not accustomed to eating meat, fish and other seafood, all boiled, without any oil! During her first week in Korea, she had only bread and juice, but now, she has adjusted herself to their food habits. “The best thing about Koreans is that they are very punctual,” she says, “My Korean classmates are very good to me and very helpful too.” Her daily class routine commences at 9 am and ends at 3 pm, after which she and her classmates engage in sparring (fighting) amongst themselves from 5 pm to 7pm. Saturdays and Sundays are off and they usually go out shopping with friends, or sometimes they spend time discussing with their professors. She finds that her professors are very kindhearted and friendly too. The head of their Taekwondo department is Mr. Park Jeong-Wook and the sparring coach is Mr. Park Jae-Joon. They are also taught English Taekwondo by Mr. Jarom Corabte, a Canadian.

Darshanajita is not the lone Indian; there. There are 5 other fellow students from India and they are Rahul Sharma from Rajasthan, and four others, Vishal Singh, Neeraj Kumar, Zuber Beg and Jatin Choudhary are from Delhi. She is, however, the only girl in their group. There’s a great deal of camaraderie amongst the Indians too and they are good friends and helpful to each other. Their course would finish next year and then they would obtain their diplomas.

Talking about her future plans, she says “My future goal is to become part of an institution which is strong, forward-thinking and progressive, and where I can fully utilize my knowledge and experience as a coach.”