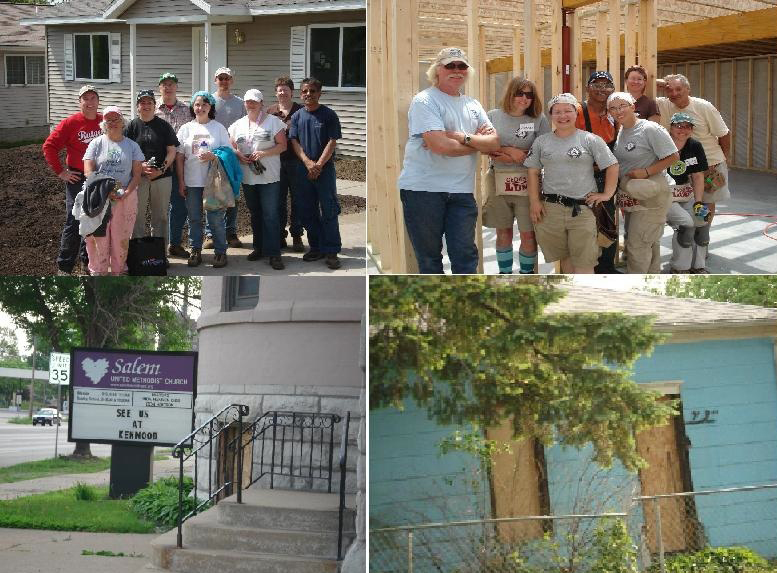 You may vaguely remember the record-breaking flood of Iowa last year!  It broke a hundred year old record. All city government buildings were under water in Cedar Rapids.  The government buildings are in the middle of an island and never had any flooding problems over the years. Luckily there were no injuries, physical ones!  It was big news last year for a couple of weeks, but as the water subsided so did the news.  Sadly though a lot of people are still displaced and many won’t be able to go back to their homes. These are also people who had no flood insurance and also people, in the low-income category who suffered the most.  About 5000 homes and 1000 businesses were damaged.  One year later, about 50% of the homes were repaired.  Of the remaining many will be demolished.  It will take ten years or so before Cedar Rapids will be like it was before the flood of June 2008!

I know people who unselfishly go all over, even outside the country to help others!  One couple I know has gone to Africa twice to do mission work.  Another family I know went to India to build homes with Habitat for Humanity!  I was curious what kind of houses they were building in India for Habitat! They went to a site in Bihar.  These houses were 9 feet by 12 feet for a family of four. Yes, those numbers are correct. I have seen pictures of them! Then another friend went to Cedar Rapids last year immediately after the flood although I found out only after he came back.  I always wanted to do some mission work like that.  I feel it’s my duty!  I have been helped at least twice by total strangers, once in India when I had food poisoning.  Probably I would have died if this stranger didn’t take me to a hospital in Calcutta.  I was in the Calcutta City Air Office.  I missed a flight to Guwahati in 1971.  I was vomiting and throwing up whole night and although there were lots of people around, none came to help!  I was very dehydrated and had no strength. After I spent the night like that, early next morning one gentleman (I like to think of him as my first encounter with an Angel!) came to the city office just to chat with some of the workers there.  He noticed me and immediately came near me.  Seeing my state of health he immediately summoned an ambulance.  I was taken to a local hospital. There they treated me.  After I recovered they explained to me that probably I would have died if I was not brought to the hospital. That gentleman was gone by now.  The second incident was in New Jersey, in 1991.  I had a motor vehicle accident and one gentleman stopped and took me to the hospital by setting me in the back of his car where he had groceries. Probably my blood dripped onto his food!  He too was gone after he made sure I was OK.  I didn’t even have an opportunity to say a simple `thank you’.  He is my second Angel!  You see I’m blessed.

I do try to remember the two incidents whenever I can!  Whenever I can, I try to give blood and work for Habitat locally!  When this friend of mine was going to Cedar Rapids again in May this year I joined him!  There were nine of us from around here in Pennsylvania.  We planned to work in Iowa for a week.  On May 16th we flew to Cedar Rapids, Iowa to work on a flood-damaged home(s).  Our trip was coordinated, as far as where and what type of work we would be doing, which house we would work on etc., by a local Church in Cedar Rapids. Majority of this kind of relief work is done by volunteers:  Churches, AmeriCorps, retired caravans, and other voluntary organizations.   I was really fascinated by the retired caravan group.  This is a group of people, mostly husband-wife couples who after retiring sold their homes. Then they bought RVs and drive around the country doing Habitat work.  Isn’t it great?!

When we are arrived in Cedar City we had three setbacks!  The hotel didn’t have any reservations for us (third-party screw-up), the family that was going to provide us meals during our stay had an emergency, and most importantly the Church could not arrange a flood damaged house for us to work on.  At that point some of the folks remarked we might as well turn around and go home.  We all however knew we were there for a good cause!  So, things would work out.  The hotel issue got resolved, couple of local families came forward to provide most of our dinners, local Habitat volunteers provided us lunch, and although we still could not work on a flood damaged home we did work on a bunch of Habitat homes.  Two of the Habitat homes were meant for families whose houses were condemned because of flood damage.  Indirectly, we were able help the flood victims! That was a great feeling!

Habitat for Humanity exists in over 100 countries! The 200,000th house was built in 2005 and the houses have served over a million people.  Those numbers have grown way up since then.  Every city or county in US has a local Habitat chapter.  So, if you are interested, do a Google search and you will find the contact information.  The only skill you need is desire to give up a Saturday or half a Saturday or even weekdays if you want!