Bihu in the Midst of Silicon Valley 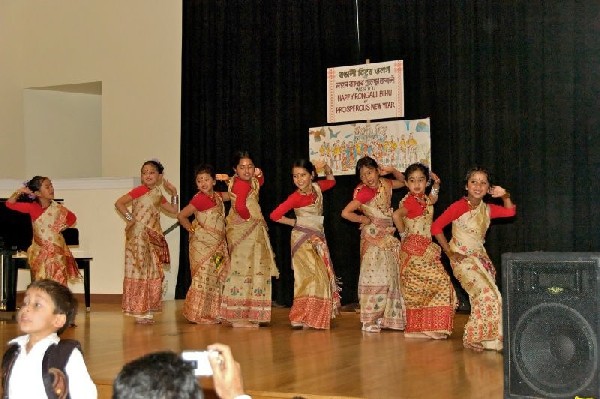 The Assamese Community of the    San Francisco Bay Area organized     its annual Rongali Bihu 2009 celebrations on Sunday, April 25, 2009 at the Ruggieri Senior Center in Union City, CA. The 200-odd people who participated in the celebrations presented a wonderful mix of the burgeoning Assamese diaspora in and around the Silicon Valley, with an ever-increasing number of newer Bay Area residents taking active part in both the organization and execution of the event.
Notwithstanding the serpentine queues since early evening around the snack tables that hosted a variety of Assamese sweets, snacks and treats, the celebrations started promptly on time at 6 PM with the kids’ cultural programs. While Miraya, Raghav, Tanvi, Urvi, Emilyn and Indali enthralled the audience with their individual rendition of traditional and modern dances, Shreya performed immaculate covers of songs that keep the audience on their feet. Anubhuti performed a recital of an Assamese poem. The group dance performances of Aditi, Shreya, Easha and Shruti in a goalporia dance, and of Mugdha, Shruti, Shreya, Lisa, Astriti, Anna, Miraya, and Aditi in a traditional kids’ Bihu dance highlighted the mélange of talent that resides in the next generation here, and were flawlessly executed thanks to painstaking efforts over background scores and choreography from Moushumi and Ranjita, respectively. The kids’ programs came to an end with Karbi’s recital on the violin, and Astriti’s performance of Ó Mur Aapunar Desh.
Following a dinner that never for a moment failed to excite the palate of even the most discerning epicurean, the cultural programs resumed with renewed vigor. Moushumi’s Xile Xile Theka Khale  was followed by Ayan’s popular Gandhi Putolak Paisane Sini. Easha, Shreya Bhattacharya, Shreya Pujari and Mugdha returned for an encore of a modern Assamese dance choreographed by Jonali and Karbi. Thereafter, Sibashish, Monmi and Bhaskar’s trifecta medley on Nahar Phule Nuxuai and Bojalije Pepati  was followed by Karbi’s Bharatnatyam and Mouchumi Bhattacharya’s Snehei Aamar Xoto Srabonor. Sanjib then treated the audience to a  Zubin Garg’s song. Following this, Manjit, Sibashish, Kalyan, Pallav, Sanjib, Uzzal, and Rhituparna, Sikha, Nandana and Maitreyee performed the traditional Husori as the evening’s celebrations started to wind up.
Notwithstanding the long evening, what took everyone by surprise was the vigor and fervor of participation in the concluding event – the Mukoli Bihu. As the celebrations concluded, everyone left the premises with a smile and a tear – a smile for being able to keep their traditions alive, and a tear for being away from their near and dear ones in Assam in this season of festivities and goodwill!